It’s March 29, 1778. Captain James Cook is on the third of his expeditions of discovery. He was in search of a safe harbour where his crew could rest, make repairs, take on fresh water and supplies. He is in the ancestral waters/lands of the  Mowachaht / Muchalaht First Nation who claim this area by virtue of thousands of years of occupation.  “When the two ships from the Cook expedition arrived at the end of March, the beach keeper from our village went out in a canoe to greet the newcomers. Standing up in the canoe and with his best oration welcomed the ships to our territorial waters and invited them to come to the harbour in front of our village. The month-long visit of the Cook expedition in our territory established an economic and political relationship. We provided the ships with daily supplies of fish, as well as water, wood, oil, and furs in trade for metal, a rare material of great value to us.” (Chief Mike Maquinna, in a paper presented at the Anchorage Museum, March 15, 2011) 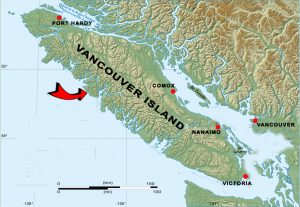 With our Nootka Island guided hike you will be stepping back in time. It is a remote coastal hike with unspoiled beaches, few, if any, hikers, a fabulous assortment of mammal, bird and marine wildlife, important historical significance, and has many outstanding scenic rewards.

Our  Nootka Island guided hike begins with a short floatplane flight from Gold River on Vancouver Island to a sheltered lake on Nootka Island. A short hike will bring us to the coast where we will begin six exciting days exploring the sandy beaches, caverns, and caves, dramatic headlands, waterfalls, giant old-growth forest, and taste of First Nations/European history.

GUEST REVIEW
“I can’t believe it has been over two months since our hike on the Nootka Island Trail. Memories of this trip will be indelibly etched in our minds for the rest of our lives. It was definitely awesome to be on the beach for five straight nights. It took us several days to adjust to sleeping beds again. We owe y’all a tremendous amount of appreciation for the nonstop effort involved in leading the group. I still can’t believe how well the food tasted.“ ~ Mark Adkin, Texas