Wilderness Adventures in BC & Yukon

The Naḵa̱mga̱lisala people of the North Island had a summer village called Ouchton in the area we now know as Cape Scott. Edward Curtis mentioned in 1915 that the name of the nation translated to “those of the unprotected bay.”

Danish immigrant Rasmus Hansen worked to start a Danish community here in 1897. This community along with a subsequent attempt in 1909 were defeated by solation, rain, wind, tides, and the ever-encroaching salal. 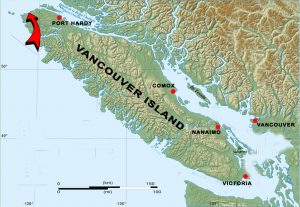 Although our North Coast – Cape Scott Trail guided hike  at the northern tip of Vancouver Island does not carry the international recognition of the West Coast Trail, it offers very similar coastal, temperate rainforest, sand and cobblestone beaches, and cultural/historical significance. The North Coast Trail is as ruggedly adventurous.

After accessing the North Coast trail by water taxi from Port Hardy, we begin a challenging wilderness trek that includes forest and beach until we reach the more groomed trail and broad sandy beaches of Cape Scott. The coastal scenery is magnificent with broad and pocket beaches, caves, and sea stacks. The forest offers large stands of indigenous trees and bog areas with dwarf vegetation.

GUEST REVIEW
“Len – I have to admit that our family group was disappointed when you told us that there were no spaces remaining for the West Coast Trail last season. You suggested the North Coast Trail as an alternative. I can’t say we were excited about the idea but we all needed to getaway. You told us we wouldn’t think we had made a mistake. You were RIGHT!  Your operations and guides were a cut above. We were blown away by the scenery, especially the beautiful wilderness beaches we camped on. The memory of this trip will sustain me through my life. Thanks for everything from the Regavid family”.  ~ Jim Regavid,  Oakville, ON

If you would like to be added to our mailing list ( includes only an annual update of trip dates or occasional special), email us with that request.

We will never sell your email or personal information to any person, organization, or business.

You can unsubscribe at any time.