Wilderness Adventures in BC & Yukon

“The Yukon River, our first choice for paddling into the past.” Canoe and Kayak Magazine

During the winter of 1897–1898 the Klondike gold rushers crossed the Chilkoot Pass and reached the frozen lakes of the upper Yukon River. Their next challenge was to build water transport to carry them down the Yukon to Dawson.  By spring thirty thousand men were camped on the lake shores for fifty miles along the upper Yukon, and almost every one of them was helping to build a fleet of seven thousand boats. On 29 May 1898, the ice on the lakes began to break up, and the boat race to Dawson began. We will canoe a portion of that race, viewing the same landscape they witnessed. 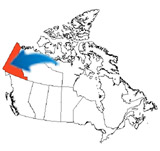 Yukon River guided canoeing adventure trip from Carmacks to Dawson City means connecting with a rich natural and human history. It is synonymous with the last Ice Age, travel and settlement, generational human presence, and the 1898 Klondike Gold Rush.

The days on the river help build our anticipation and excitement of reaching Dawson City, the center of the 1898 Klondike Gold Rush. That anticipation must have been equally apparent to the gold rushers. Finally, a distinct landslide scar and Dawson City comes into view.

GUEST REVIEW
“Sea to Sky is the best run commercial company I’ve been with and the food was outstanding.I REALLY enjoyed both the Yukon River canoe trip and the Chilkoot Trail and to a large extent, it’s due to you and your guides. I particularly liked your relaxed and laid back style Len, the subtle way you kept an eye on what everyone needed without being intrusive and the way you treated all the clients equally. I believe that it’s a real art to be a good guide.“ ~ Doug Jamieson, Saudi Arabia

Self Guided Yukon River” If you decide that a self guided Yukon River or Teslin River paddle is your choice, we recommend our excellent river guidebooks on our menu bar at the top of the page.

If you would like to be added to our mailing list ( includes only an annual update of trip dates or occasional special), email us with that request.

We will never sell your email or personal information to any person, organization, or business.

You can unsubscribe at any time.